It’s summer time again in Bookham Commons woodland and an impressive display of foliage has burst forth under the influence of longer, lighter days and the warmer temperatures encouraging growth.

Everywhere you look there is greenery, each leaf and tendril competing for a share of the light, rambling, climbing and spreading to cover the commons in a canopy of green.

Look closely and you may notice that all this foliage is host to some pretty flowers such as the common spotted orchid and interesting creatures like the honeybee, hovering for nectar and the shell of a garden snail.

Down on the ground near the Isle of Wight pond dozens of tiny toads are hopping their way across the road and heading upstream. These amphibians have emerged from their tadpole phase and have left the water’s edge in search of food. Watch your step, they are tiny and easy to miss.

Meanwhile over in the central wood the ground has dried out which means easier walking and chance to explore some of the lesser-traveled pathways. At one spot between eastern and central wood, 5 paths merge and here on a hot sunny day, tunnels of cool dappled shade are just right for a late afternoon stroll.

Heading down to the ponds and over the earth wall between the two, it’s evident that aquatic plant life is responding to the warmer conditions by the presence of a thick covering of spongy-looking pond weed-otherwise known as the New Zealand waterstone crop (crassula helmsii); here and there channels have been opened up thanks to ducks, coots and other water birds threading their way through to the reed banks.

There is a narrow path that leads from the ponds back to the main entrance and here a woodland brown butterfly pauses on the bank of sunlit leaves alongside the path. Eventually the female will drop her eggs onto the ground where the half-grown caterpillar will hibernate, covered by leaf litter.

In the meadow that skirts the commons, the grasses are beginning to reach maturity. There are grasses of different heights and types, a mosaic of species in the grassland ecosystem. In amongst golden seed-tipped stems are smudges of purple meadow thistles and yellow buttercups.

Leaving the Commons by way of the railway station lies a decaying tree trunk struck by the bracket or shelf fungus, a fruiting body that attacks the wood of living or decaying trees and a reminder of the cycle of life processes at work year round. 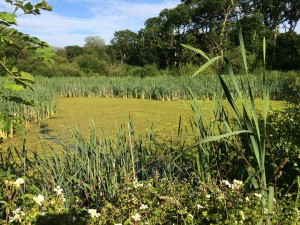